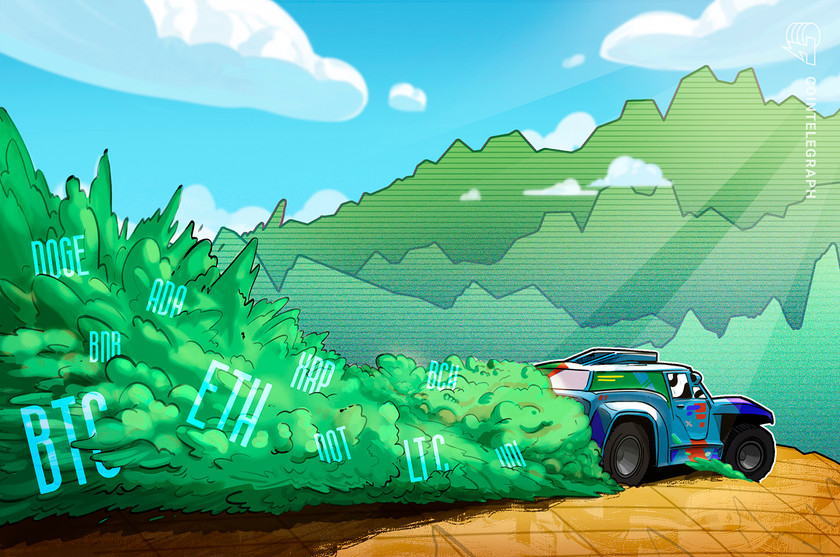 Bitcoin is showing signs of topping out but many altcoins remain strong, a signal that the decoupling between the two is likely to continue for a few more days.

The Crypto Fear and Greed Index has dipped to levels not seen since April 2020, indicating that traders are nervous about Tesla backtracking on accepting Bitcoin (BTC) payments, Bitcoin’s multi-week technical weakness and U.S. regulator’s supposed investigation into the business operations of Binance exchange.

This nervousness also led to a massive inflow of 30,000 Bitcoin to the exchanges, the highest number since the March 2020 crash. This suggests some traders are booking profits on their long positions. CryptoQuant CEO Ki Young Ju said that whales have continued to send more coins to exchanges than usual, implying that near-term bearishness may not be over yet.

However, popular statistician Willy Woo believes that recovery after the Elon Dump has started and analyst William Clemente also painted a positive picture as he said that “Bitcoin held up very well” given the “largest day of exchange inflows since the March crash last year”.

The short-term picture is uncertain with analysts divided in their opinions, but what does the long-term picture project? Let’s analyze the weekly charts of the top-10 cryptocurrencies to find out.

Bitcoin’s uptrend has been facing stiff resistance at the 100% Fibonacci extension level at $60,959.64. Although the bulls had pushed the price above this resistance, they could not sustain the breakout, indicating a lack of demand at higher levels.

The BTC/USDT pair has formed a head and shoulders pattern, which will complete on a breakdown and close below the neckline. If that happens, the pair could drop toward the pattern target at $28,939, which is just above the 50-week simple moving average ($27,335).

The 20-week exponential moving average ($47,444) is flattening out and the relative strength index (RSI) has formed a negative divergence, indicating signs of weakening momentum.

Ether (ETH) has been in a strong uptrend but the large moves in the past two weeks indicate frenzied buying, which usually ends in a topping formation. The RSI has risen above 88, indicating the rally is over-extended in the short term.

If the price turns down from the current level, the ETH/USDT pair is likely to find strong support at the 38.2% Fibonacci retracement level at $3,195.98. Due to the uptrend, the bulls are likely to buy the dip and attempt to resume the up-move.

The uptrend in Binance Coin (BNB) has hit a wall at the 161.8% Fibonacci extension level at $680.03. However, the bulls are not willing to let go of their advantage as they have purchased the dip to the 38.2% Fibonacci retracement level at $513.45. This suggests the sentiment remains bullish.

Dogecoin (DOGE) has been in a strong uptrend for the past few weeks. The large weekly ranges show increased trader activity as both the bullish and bearish moves are exaggerated.

The long wick on last week’s candlestick showed aggressive profit-booking at higher levels. However, the bears could not capitalize on the opportunity and keep the pair down as the bulls bought the dips this week, as seen from the long tail on the candlestick.

When the bulls buy the dips and bears sell at resistance, the asset usually enters a range-bound action and the volatility drops. In this case, the DOGE/USDT pair may consolidate in a large range between $0.35 and $0.73 for the next few weeks.

After a sharp up-move from $0.33 to $1.48, Cardano (ADA) had been range-bound between $1 and $1.48 for several weeks. A consolidation near the highs is a positive sign as it shows that traders are buying on dips and not dumping their positions on corrections.

Both moving averages are sloping up and the RSI is in the overbought territory, indicating that the bulls are in control. This positive view will invalidate if the price turns down and drops below the breakout level at $1.48. If that happens, the pair could drop to the 20-week EMA ($1.06).

XRP spent considerable time trading between $0.21 and $0.78. Generally, the larger the time spent in a range, the stronger is the eventual breakout from it. When the price broke above $0.78, the altcoin soared to $1.96 within two weeks.

However, vertical rallies are rarely sustainable and that is what happened. Since reaching a high of $1.96, the XRP/USDT pair has been witnessing volatile moves, which has resulted in the formation of a symmetrical triangle.

After the large range moves of the past few weeks, the volatility is likely to drop and the pair may enter a tight range trading once again. The rising 20-week EMA and the RSI near the overbought zone suggest the bulls have the upper hand.

Polkadot (DOT) has been consolidating between $26.50 and $44 for the past few weeks. Several attempts by the bulls to resume the uptrend failed to attract buyers at higher levels. Due to that, the price again re-entered the range.

However, the positive sign is that the bulls have not allowed the price to drop below $26.50. This suggests accumulation at lower levels.

If buyers propel the price above the $44 to $48.36 resistance zone, the DOT/USDT pair may resume its uptrend and march toward the target objective at $63.68. The rising 20-week EMA ($30) and the RSI in the positive territory suggest the bulls are in command.

This positive view will invalidate if the price turns down from the overhead resistance and plummets below $26.50. Such a move could signal the start of a downtrend.

Bitcoin Cash (BCH) has been consistently making higher highs and higher lows for the past few months, indicating an uptrend. The altcoin has been facing profit-booking above $1,430 as seen from the long wick on the previous week and this week’s candlestick.

However, a minor positive is that the bulls purchased the drop to the 38.2% Fibonacci retracement level at $1,113.61 this week. This suggests that traders are viewing the dips as a buying opportunity.

On the contrary, if the price turns down from $1,638.08, the pair may remain range-bound for a few weeks. The first sign of weakness will be a break and close below the 50% Fibonacci retracement level at $951.60.

Litecoin (LTC) has been in a strong uptrend for the past few months and it has consistently stayed above the 20-week EMA ($219). The rising moving averages and the RSI in the positive territory suggest the bulls have the upper hand.

Last week, the bulls pushed the price above the 2017 high at $370, which is a positive sign. The bulls followed it up with a new all-time high at $412.76 this week but they could not sustain the higher levels and profit-booking set in.

The LTC/USDT pair has again dipped below the breakout level of $370, suggesting the markets have rejected the breakout. If the price sustains below $370, the pair could gradually correct toward the 20-week EMA.

A strong rebound off this support will suggest that bulls remain in control and the pair may then gradually move up to $370. A break below the 20-week EMA will suggest a change in trend.

Uniswap (UNI) is in an uptrend and it has been trading inside an ascending channel for the past few weeks. Although the price had dipped to the support line of the channel this week, the long tail on the candlestick suggests aggressive buying at lower levels.

If the buyers push the price above $45, the UNI/USDT pair could start the next leg of the uptrend that may reach the resistance line of the channel at $56.50.

A breakout and close above the channel could signal a pick up in the momentum and the next target objective is the 138.2% Fibonacci extension level at $68.89.

Contrary to this assumption, if the price turns down and plummets below the support line of the channel, the pair could drop to $25 and then to $16.84.