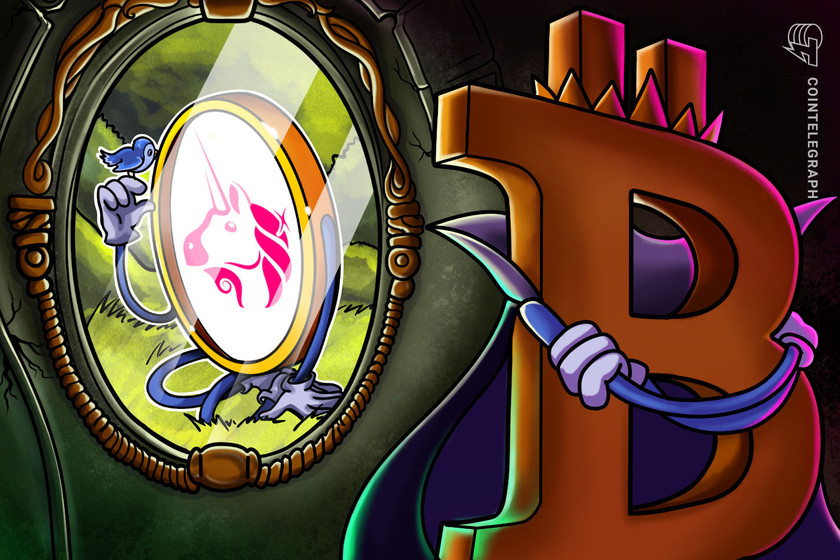 Uniswap has surpassed Bitcoin in terms of daily fee generation for two days in a row.

The fee flippening was observed by crypto industry blogger Evan Van Ness citing figures from CryptoFees, a website that compares the daily fees generated by the top blockchain networks.

Wouldn’t surprise me if market caps were

Uniswap founder Hayden Adams was quick to post about the milestone:

At the time of writing the website was reporting that Uniswap had generated $7.1 million in fees over the past 24 hours compared to Bitcoin’s $4.6 million.

Although a million critics immediately pointed to high gas fees on Uniswap being responsible, Adams pointed out revenue in question was actually swapping fees paid to liquidity providers rather than gas fees. In fact he said gas fees in ETH generated by Uniswap are exponentially higher than Bitcoin’s transaction fees.

This is swapping fees paid to LPs

Uniswap has now flipped Bitcoin for two days in a row for liquidity provider fees according to the sit. The 7-day average for the decentralized exchange is also now higher than Bitcoin’s, with $5.9 million compared to $5.3 million

However Ethereum was streets ahead of both Uniswap and Bitcoin with a daily fee count of close to $90 million due to record high gas costs.

In a separate tweet, Adams stated that Ethereum layer-two scaling is badly needed, stating that today, Uniswap users alone have spent around $42 million on gas fees, adding “this is almost 5X what was spent on Bitcoin network fees during the same period”.

There was a flurry of complaints from Uniswap users when version 3 was rolled out on May 5 as gas fees appeared to be even higher than the previous iteration of the platform. A layer-two version based on Optimism is due to launch soon.

Average gas prices have skyrocketed to a record high of $68 according to Bitinfocharts. Eth Gas Station is reporting that gas costs for more complex operations such as smart contract interactions or DEX token swaps are currently over $200.

Many of the respondents to Adam’s tweet asked when layer-two scaling would be rolled out for Uniswap. YouTuber Lark Davis was among them, stating:

“Great, now implement some layer 2 scaling so that Uniswap is actually usable by non-rich users. Polygon is ready and waiting. Aave, Curve, Sushi, Pool together all on it. Optimism is months away. Why wait?”

However, Optimism may be closer than many realize for whitelisted projects including Uniswap. Another whitelisted DeFi project, Synthetix, has just completed an upgrade to enable Optimism trading, although there’s no confirmation on when it will go live.