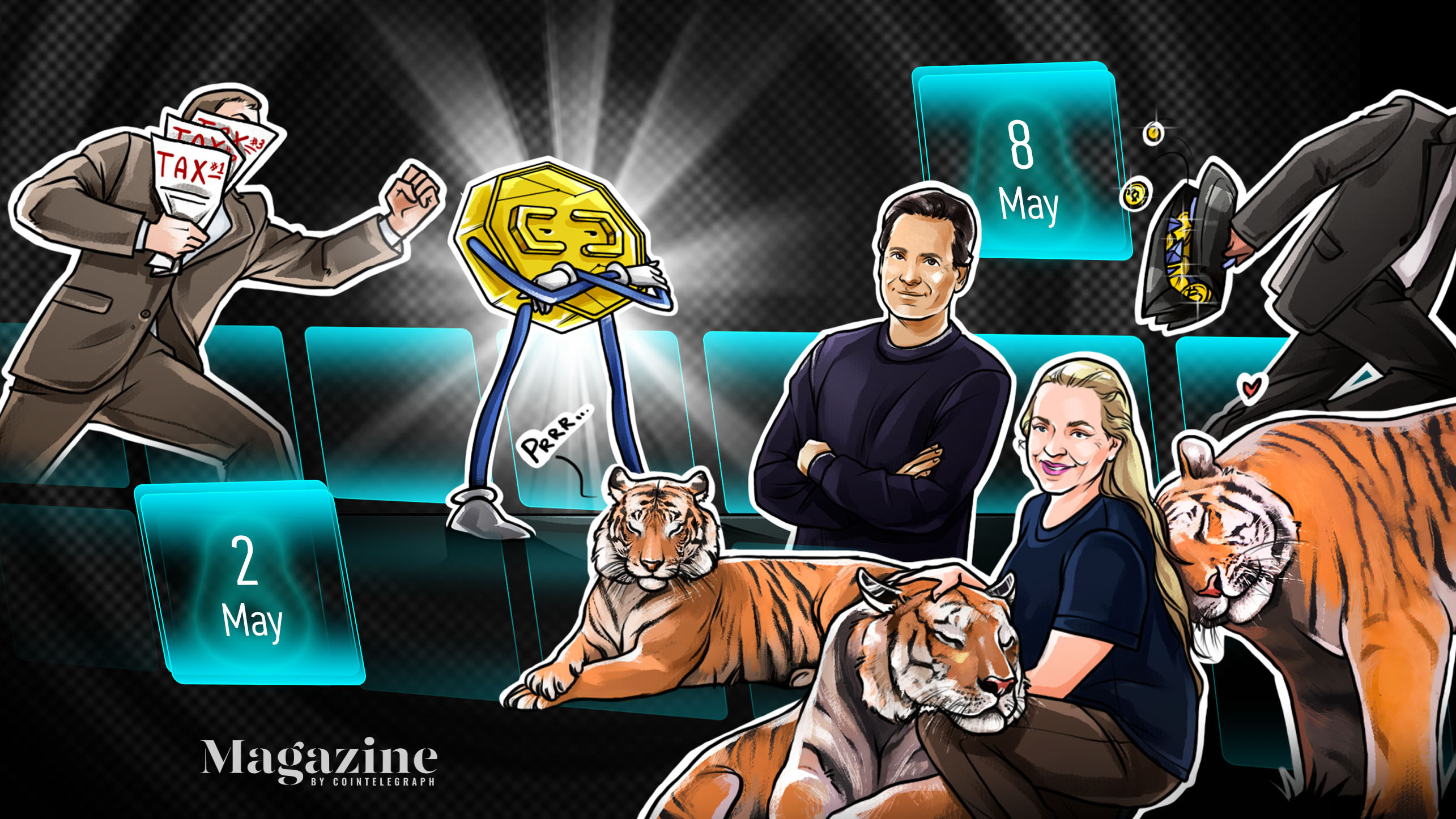 Coming every Saturday, Hodlers Digest will help you track every single important news story that happened this week. The best (and worst) quotes, adoption and regulation highlights, leading coins, predictions and much more a week on Cointelegraph in one link.

Were well and truly in the throes of altseason now, with Bitcoins dominance showing no signs of diminishing.

Ether delivered a stunning surge that took its price above $3,000 for the very first time, breaking new records throughout the week. On Saturday, ETH remained in uncharted territory after racing to highs of $3,800.

Among those celebrating ETHs spike will be Ethereum co-founder Vitalik Buterin, who has officially become a crypto billionaire. Excitement is continuing to build ahead of a long-awaited upgrade that will overhaul the networks gas fee structure in July.

ETH is in good company, too. EOS rallied by more than 100% this week following a recent protocol that increases the projects inflation rate. Litecoin has hit a one-year high against Bitcoin, with many analysts predicting extended upside momentum. And Bitcoin Cash jumped 68% amid rumors that a looming hard fork could boost the networks user base.

Even Ethereum Classic, the hard fork sparked by disagreements after a devastating 2016 hack, has pumped 130% in the past week.

Of course, theres one altcoin in particular that continues to steal the show

DOGE has seemed unstoppable in recent weeks. It hit unprecedented highs of $0.7376 early on Saturday. To put into context how bonkers the joke cryptocurrencys surge really is, $1 invested on Jan. 1 would now be worth $139 at current prices.

Mania over the financial homage to Shiba Inus everywhere may be about to reach a climax when DOGE enthusiast and mega-billionaire Elon Musk hosts Saturday Night Live. Its inevitable that his appearance will feature endless sketches about Dogecoin, and that could pump prices even further.

But not everyone is finding DOGEs surge to be a cause for celebration. Lowstrife, a popular account on Twitter, believes the end is nigh, with the crypto trader spotting eerie similarities between DOGEs current charts and XRP in the heady days of 2018.

Warning of an impending apocalypse for DOGE, Lowstrife wrote: Each of DOGEs major rallies this year has been smaller and less aggressive. What took 18 hours at first has been ongoing for 2 days now. I suspect this is the final push before its all over for good. May 8th is the day to watch.

Even Musk himself has been cooling the hype, reminding followers that crypto investments remain speculative.

A flurry of earnings results this week powerfully illustrated the impact that Bitcoins sensational first quarter has had.

Square blew analysts expectations by delivering earnings of $0.41 per share between January and March far beyond the $0.16 forecast. Revenue came in at $5.06 billion, dwarfing predictions of $3.36 billion.

Squares also sitting on paper profits of $250 million after making two high-profile Bitcoin purchases one in February and one in October.

PayPal has also been heralding the great results it has been receiving from its crypto service. The platforms earnings and revenue also exceeded predictions in Q1.

COIN bottomed at $255.15, where it was in danger of breaching the $250 reference price set on the eve of its public listing in April. All of this comes despite the total market cap of all cryptocurrencies surging beyond $2.4 trillion.

FBB Capital Partners director of research, Mike Bailey, told Bloomberg: We saw a mini-bubble in SPACs, IPOs, crypto, clean-tech and hyper-growth in late 2020 and early 2021 and many of these asset classes are nursing bad hangovers.

(That said, his assertion that crypto is nursing a bad hangover is misplaced.)

Coinbases woes may be linked to increasing competition among crypto exchanges, which has left retail investors spoiled for choice. Theres a danger that this could eat into the revenues it derives from transaction fees, which make up most of its income.

Elon Musks stint on the box this weekend serves as a powerful counterweight to comedian Bill Maher, who didnt leave crypto enthusiasts in stitches during a recent segment.

On Mahers program, he compared the industry to a virtual game and talked about mining in a derisive tone. Maher also implied that investing in tokens was a childish endeavor, and illustrated his point with quotes from Warren Buffett.

He said: There is something inherently not credible about creating hundreds of billions in virtual wealth with nothing ever actually being accomplished and no actual product made or service rendered. […] Unfortunately, what is real is the unfathomable amount of electricity those massive supercomputers suck up for their mining.

Maher even quipped that Satoshi Nakamoto, the pseudonym used by Bitcoins inventor, is the Japanese term for Monopoly money.

Anthony Pompliano shared the clip along with this caption: Never ask a comedian for investment advice.

Binance CEO Changpeng Zhao replied, writing: Very sad to watch. Feel really hopeless for him. Jokes going to be on him. Time will show.

For more info on crypto prices, make sure to read Cointelegraphs market analysis.

Looks like Uniswap v3 is more gas expensive than v2, roughly as expected.

With cryptocurrencies already creating incredible worldwide wealth, its real estate that will sustain that wealth and provide buyers with a legacy.

We saw a mini-bubble in SPACs, IPOs, crypto, clean-tech and hyper-growth in late 2020 and early 2021 and many of these asset classes are nursing bad hangovers.

It definitely can go much higher, I think we can see the price go to $10,000, where a lot of ETH bull price targets begin to kick in and people take profits.

Weve committed to having no HQ, and its important to show our decentralized workforce that no one location is [more] important than the other.

Each of DOGEs major rallies this year has been smaller and less aggressive. What took 18 hours at first has been ongoing for 2 days now. I suspect this is the final push before its all over for good. May 8th is the day to watch.

DeFi may lead to a paradigm shift in the financial industry and potentially contribute toward a more robust, open, and transparent financial infrastructure.

Volatility is everywhere [] It is not unique to crypto.

Of course I hate the Bitcoin success, and I dont welcome a currency thats so useful to kidnappers and extortionists and so forth.

There is something inherently not credible about creating hundreds of billions in virtual wealth with nothing ever actually being accomplished and no actual product made or service rendered.

Prediction of the Week

They see ETH rollin: Why did Ether price reach $3,500, and whats next?

Ethers booming price has prompted feverish talk about a long-fabled flippening where ETH overtakes BTC as the worlds largest cryptocurrency.

Although thats fanciful right now, there are a number of bullish predictions when it comes to where Ethers price is headed next.

One of them comes from Nikhil Shamapant, a retail investor who recently published a research report where he argued ETH could be worth $150,000 by 2023.

He told Cointelegraph: It definitely can go much higher. I think we can see the price go to $10,000, where a lot of ETH bull price targets begin to kick in and people take profits. I think well head up to that $10,000-to-$25,000 range, hit a lot of supply and could see some big drawdowns and consolidation at that point.

FUD of the Week

Data suggests that Uniswap v3 had a successful first 24 hours processing more than twice the volume that v2 did in its first month.

But not everyones been enamored with the latest iteration of the worlds most popular decentralized exchange, with some users complaining about the costs associated with using it.

One person wrote on Twitter: Even more expensive to make mistakes now. Tried to migrate my UNI/ETH liquidity to V3, failed and paid 108.09 usd worth of gas.

Dragonfly Capitals managing partner, Haseeb Qureshi, also wasnt impressed. On Twitter, he wrote: Looks like Uniswap v3 is more gas expensive than v2, roughly as expected. […] Specifically, its about 28% more expensive for single-hop transactions it looks like. For larger transactions that cross multiple ticks/buckets, the gas costs should be slightly larger.

Data centers would only be allowed to operate if they pass an environmental impact review, amid concerns that BTC mining could cause the state to miss ambitious targets designed to tackle climate change.

New York Senate Bill 6486 said: A single cryptocurrency transaction uses the same amount of energy that an average American household uses in one month, with an estimated level of global energy usage equivalent to that of the country of Sweden.

The bill is yet to receive widespread backing from other senators. However, the Democrats do control the lower house and senate.

Employer paid worker in crypto, then demanded it back when price rose

A United States-based business development specialist has claimed that a company that paid them for contract work using cryptocurrency now wants them to return the tokens following a significant rally in the assets price.

The unnamed employee, known only as Crypto Confused, wrote to MarketWatch and said: I am not really sure what to do. I have worked with this person for many years, and he has a tendency to try to change the terms of payment after agreeing on a certain way of operating.

Columnist Quentin Fottrell replied: If the value of the cryptocurrency had fallen by 100% since August 2020, would he want to pay you in dollars? If it suddenly dipped by that amount today, would he follow up with his employees?

DOGE as internet money? TikTokers and sports fans see a use case for Dogecoin

As experts pinpoint various groups as Dogecoins vanguard, the coins potential base seems to be a wide coalition.

From nay to yay: JPMorgans path to crypto could shake up finance

After bashing Bitcoin back in 2017, JPMorgan CEO Jamie Dimon seems to have softened his stance on crypto, and so has the firm itself.

Declaring BTC a store of value gold 2.0 but not a medium of exchange, defies logic. It must first have a use case.