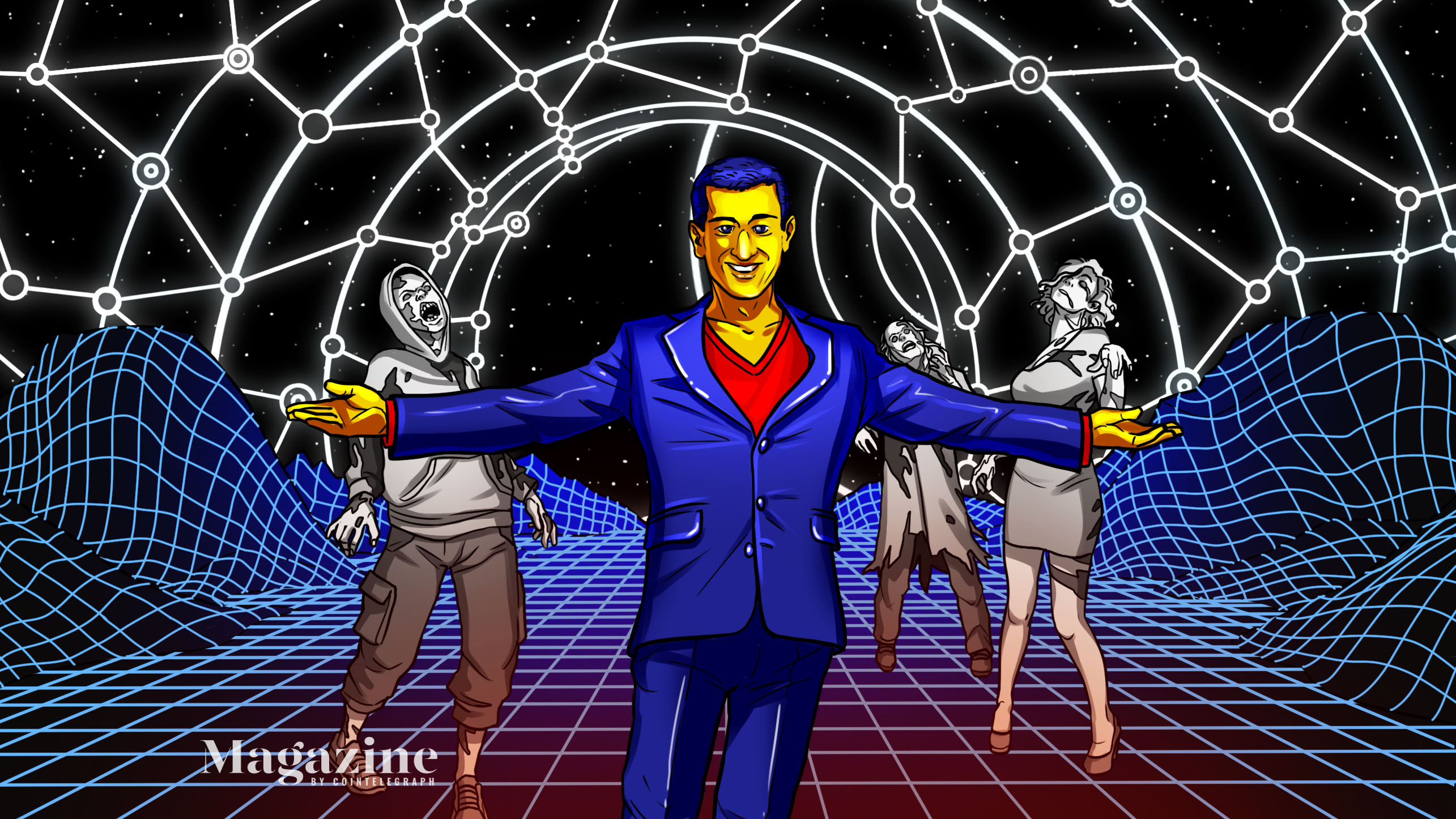 Sam Englebardt has produced zombie films, created Gold Class cinemas in Australia and hobnobbed with crypto pioneers in the early days. Now hes investing half a billion dollars into the creation of the metaverse.

Galaxy Interactive managing partner Sam Englebardt first met billionaire and former hedge fund manager Mike Novogratz during a whirlwind, celebrity-studded trip to Haiti in 2016. Englebardts fiance, Megan, had invited him down at the last minute for a shindig put on by Artists For Peace and Justice.

It was a fun weekend, Englebardt explains. Its [Crash director] Paul Haggis organization. Susan Sarandon was there and Ben Stiller. It was a great celebration of this really terrific school that they built.

Mike and I really hit it off. We realized we had a ton of overlapping interest in technology: in Bitcoin and crypto specifically, in VR and AR, he says. Nine months later, after their friendship had developed, Novogratz told Englebardt he needed to join him in New York to help institutionalize his family office.

He loves Megan, my fiance. I remember we were having breakfast one morning, and he says, You know, Sam, if you dont come to New York and work for me in my family office that Im starting, Megans gonna dump you! he says, laughing.

The original plan for Galaxy Digital was built around more traditional ways to make money with venture capital funding, debt and late-stage private equity, but it was overtaken by events around the incredible crypto bull run across 201617.

The plan went out the window when we realized, wow, were in a better position than anybody to really build Galaxy Digital and pursue this mission of institutionalizing crypto and blockchain, says Englebardt, officially a co-founder. And the rest is this wild journey were on.

Galaxy Interactive invests in cutting-edge tech around things such as virtual reality and augmented reality (including Polyarc), artificial intelligence (Hour One), as well as blockchain-based games (Playable Worlds). So far, theyve deployed around $200 million into interactive content studios and social platforms and the infrastructure and tech that powers the space.

Remember Block.ones $4.1-billion initial coin offering for EOS back in 2018? Part of that money went into a $325-million fund initially aimed at general development on EOS, but which transformed into a $256-million fund under the auspices of Galaxy Interactive after Englebardt and partner Richard Kim grew more excited about the space. Theyre in the process of raising another $300-million fund, again focused on interactive content.

Theres huge money involved in the gaming industry, with Newzoo forecasting the sector will have attracted 3 billion gamers and will have generated $217.9 billion by 2013, making it three times the size of the film and music industries combined. Englebardt believes that gaming primed the world for the explosion in nonfungible tokens and the ownership of virtual digital objects weve seen this year.

People over the last 20 years have become incredibly comfortable with the idea that digital objects have value, he says. That a sword in a game can be worth something in terms of real money, and that people would want to buy, sell and trade it.

And, by the way, it was a lot of the same people that built the systems that allowed you to create and trade and monetize digital objects and games, then came out and built a lot of the same technology thats powering the whole blockchain and crypto explosion.

Born in Ohio in 1977 which makes me a dinosaur I think in crypto land he studied law at Harvard, as well as philosophy, political science and economics at both the University of Colorado and Oxford. He grew so fascinated with Plato, Descartes and David Chalmers and the philosophy of mind that for a while, he planned on becoming a professor of philosophy. It may explain why hes more interested in the virtual worlds that games are built in than the games themselves.

What I love about philosophy is you just study the process of thinking and train yourself to have an open mind and explore ideas and to love the exploration of ideas. Not only is it just really fun and intellectually stimulating but its a great way to be a venture investor, too, he says.

He also took a class on the history of cinema, which sparked a lifelong obsessive passion for film and filmmaking and led him to create a film financing business. While I was still in law school, I started a company financing, producing and financing independent film, he says. That was the start of my business life.

Over the course of his career, Englebardt produced or executive produced zombie films for George A. Romero (Diary of the Dead, Survival of the Dead), the Sin City sequel (A Dame to Kill For) along with the more recent AMC show The Night Manager.

He also created the concept of Gold Class Cinemas in Australia premium cinema experiences with big recliners and overpriced food and drink and partnered with the Lambert Media Groups Michael Lambert to put together the fourth-largest cinema chain in the United States called Rave Cinemas, which they sold in 2013 to Cinemark.

From 2003 or so to 2013, I was involved in operating or investing in every type of old media business that you could get that was in secular decline, says Englebardt wryly. The winds of change were beginning to blow.

It was impossible not to see what was happening with digital media and digital content. As I looked at that, I kind of stumbled into some of the same people that are now some of the real pioneers of crypto, building gaming businesses.

Although hed made his first investment in a gaming studio called Seismic in 2010, it wasnt until 2013, when Occulus was bought by Facebook, that he began to realize the future belonged to interactive content. He made his first VR investment that year into eye-tracking technology called EyeFluence, which was later sold to Google.

At the time, gaming was considered un-investable by venture capital; it was deemed another form of content, not really technology, he says. I just saw it and thought, Oh, my God, I mean, this is so obvious. This is where people are headed.

The writing was on the wall in terms of the passionate diehard interest from these younger demos, the opportunity for people that have so much more agency in the content that theyre consuming, and to really actively participate and lean into their content experience.

As with so many others, it was Blockchain Capital, Tether and Block.one founder Brock Pierce who introduced Englebardt to the world of crypto.

Brock was the first person to say the word Bitcoin to me for sure, he says. He was really the person who took the time to educate me on why it was important, why it mattered. He has been more than anybody I know, one of the most important evangelists for decentralized technology in the world.

There was a whole gang of LA people who went on to be pioneers in one way or another in their sphere of influence in the crypto world. And we would get together once a week or once every couple of weeks and have a dinner party, talking about what was going on.

While the world is currently gripped in a full-blown NFT mania, and most trace its lineage to CryptoPunks and CryptoKitties in 2017, Englebardt says that digital ownership has been an inevitable development for longer than that.

There were a million reasons to look at CryptoKitties and say, Oh, yeah, this whole thing is crazy and its not going to work. But if you understood the enormous world of in-game objects which were, even three or four years ago, such an enormous part of the overall business of games, especially if you understood blockchain technology, I think it was impossible not to recognize that this was an opportunity for a whole new industry.

We saw millions of people consuming and spending tens of billions of dollars on digital objects, he says. People are bringing the game objects, but also just game behavior and gamification, out into all these other areas of their lives.

The deeper I went into games, the more that I felt certain that we were going to see this behavior play out in other aspects of our lives and with objects outside of games.

Snow Crash and the metaverse

With a 10-year horizon for his VC investments, Englebardt is used to living in the future in his mind, and he sees the metaverse fast approaching. Popularized by Neal Stephensons 1992 novel Snow Crash, the concept refers to a virtual world that connects all the other virtual worlds and that players spend most of their time living in.

Essentially, its an immersive version of the internet, and Englebardt believes that digital ownership via NFTs will be the foundational pillar. Thats because people are more likely to invest time and effort to create something if they know theyll own it forever and that its not subject to the whims of a virtual worlds owner, as is the case with something like Fortnite or World of Warcraft.

Were a species that wants to make stuff and the more incentivized we are to make things and monetize them (the better), he says. [Building the metaverse] requires people being incentivized. The content itself cant be created from a top-down perspective; its gonna need to be utilizing the incentive systems and tools that are being built now to encourage people to build and contribute content.

Once you empower people to create and enable them to monetize the things that they make, it really changes everything in terms of how they talk about; how they engage with it; how they market a particular place for you.

He cited Andreessen Horowitz general partner Chris Dixons observation that a key reason Bitcoin and Ether have accrued so much value is that they have tens of millions of super passionate users building on or around them and spreading the word.

There hasnt been $1 of marketing spent, and thats because youre taking users and youre turning them into creator owners. And thats whats happening in game economies and why its so exciting.

The best of blockchain, every Sunday

Subscribe for thoughtful explorations and leisurely reads from Magazine.

In a piece about NFTs in February, Dixon expanded on the theme, saying NFTs have the power to free users from centralized platforms that take their content and keep the revenue, to instead build on the original ideals of the internet: users and creators globally connected, unconstrained by intermediaries, sharing ideas and economic upside.

The first manifestations of the metaverse can be seen in blockchain-based virtual worlds such as The Sandbox and Decentraland, where users can already buy and own property and create and trade content and digital objects with each other.

But before we get to a Ready Player One-style future, a bunch of stuff needs to happen.

No one person or no one company is going to build all of the metaverse. I mean, its tools are being built, but its going to require so many different pieces coming into place to get to that Snow Crash level place, he says. Youre going to need GPU power to actually support all of this; theres a million things that have to happen. So, weve got quite a ways to go.

But were clearly past the point where people are spending an enormous amount of time in digital worlds, and making their living in them, and creating jobs in them and so on. Thats happening now.

The persistence of digital objects across digital and physical worlds, the ability in a decentralized way, in a peer-to-peer way to share the things that we own, to buy and bring a digital object from one environment into a physical environment and hand it off to somebody, all of that stuff is being built now. Its not that far away.