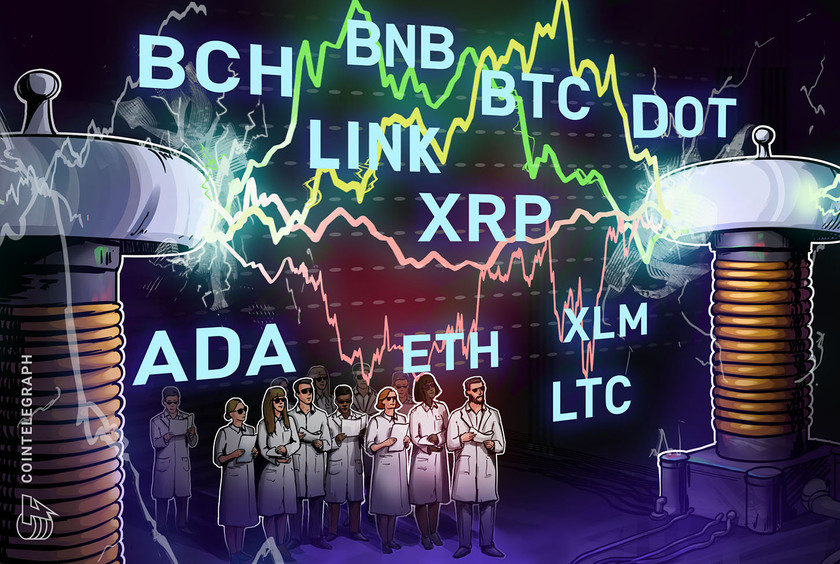 Bitcoin’s surprise rally to $38,500 lifted sentiment across the market but the temporary boost appears to be losing steam.

Sentiment plays a major role in the short-term price action of an asset. This truth was demonstrated today when Elon Musk, the world’s richest man, simply wrote ‘Bitcoin’ in his Twitter bio. Crypto traders and Musk followers immediately noticed and Bitcoin price conveniently shot up a few minutes after the tweet.

When BTC price makes a sharp directional move, traders buy into the breakout and short-sellers are squeezed out of their positions. That is what seems to have happened with Bitcoin (BTC) as the sentiment swiftly turned bullish.

It is not only Bitcoin that has seen a pick up in sentiment. Rumors were afloat that Reddit users, who were recently responsible for GameStop’s massive surge in price, were discussing whether or not Dogecoin’s (DOGE) could be pushed to $1. This resulted in a huge spike in Dogecoin’s price.

Trading with excessive greed and emotion can be risky. While professional traders may make money in such volatile environments, the novice retail trader usually gets stuck at higher levels and has to bear heavy losses. Therefore, traders should keep their greed in check and stick to their trading strategy.

In volatile environments, the price action and trends can change quickly. Let’s analyze the charts of the top-10 cryptocurrencies to spot the support and resistance levels that could be helpful in making trading decisions.

The buying continued today and the bulls have propelled the price above the downtrend line. This move invalidates the short-term bearish view on the BTC/USD pair.

Contrary to this assumption, if the price turns down from either overhead resistance, the bulls are likely to defend the 20-day EMA. If they succeed, it will suggest traders are buying on dips. The bulls will then again try to resume the uptrend.

The trend will turn in favor of the bears if the pair turns down and plummets below the critical $28,850 support.

Ether (ETH) bounced off the 20-day EMA ($1,234) on Jan. 28, which shows the bulls are aggressively buying on every minor dip and are not waiting for a deeper correction to enter long positions.

The bulls had driven the price above the $1,400 overhead resistance today but are currently struggling to hold the higher levels. If they can sustain the price above $1,400, a retest of the all-time high at $1,473.096 is possible.

A breakout to a new all-time high will open the gates for a further rally to $1,675 and then $2,000. The upsloping moving averages suggest advantage to the bulls, but the negative divergence on the relative strength index (RSI) points to a weakening momentum.

If the bears can sink and sustain the ETH/USD pair below the uptrend line, it will indicate weakness.

A shallow correction after a strong rally and consolidation near the overhead resistance are signs of strength. This shows traders are not booking profits in a hurry as they anticipate the uptrend to resume.

If the bulls can push the price above $19.40, the next leg of the uptrend could begin. The first target objective is $24 and then $27. The upsloping moving averages and the RSI above 60 suggest the bulls are in control.

This bullish view will invalidate if the price turns down from the current level and breaks below the $14.7259 support. Such a move will suggest traders are aggressively booking profits and that could result in a drop to the 61.8% retracement at $11.8383.

The bulls defended the $0.245 support on Jan. 27 and XRP started a relief rally on Jan. 28. This shows traders are accumulating at lower levels. The flat 20-day EMA ($0.28) and the RSI just below the midpoint suggest the selling pressure has reduced.

The bulls had pushed the price above the downtrend line today, but they could not sustain the higher levels. This indicates, traders are offloading their positions at higher levels as they do not expect a sustained up-move.

If the price turns down from the current level, the bears will again try to break the $0.245 support. If they succeed, a drop to $0.17351 is possible. On the other hand, if the bulls can sustain the price above the downtrend line, the XRP/USD pair may rally to $0.3855.

Cardano (ADA) bounced off the support line of the ascending channel on Jan. 28, which shows the bulls are accumulating on dips. The buying has continued today and the altcoin has risen above the downtrend line.

The gradually upsloping 20-day EMA ($0.32) and the RSI in the positive zone suggest bulls have the upper hand. This bullish move will be negated if the price turns down and plummets below the support line of the channel. If that happens, the pair could drop to the 50-day SMA ($0.24).

The bulls flipped the previous resistance at $20.1111 into support when Chainlink (LINK) rebounded off it on Jan. 27. The buyers will now try to resume the uptrend by pushing the price above the all-time high at $25.7824.

If they succeed, the LINK/USD pair could rally to $30. The upsloping moving averages and the RSI in the positive territory suggest the trend favors the bulls.

Contrary to this assumption, if the pair turns down from the current level or the overhead resistance and breaks below $20.1111, it will suggest the sentiment has turned negative and traders are selling on rallies. That could pull the price down to $17.7777 and then to the 50-day SMA ($16).

Litecoin (LTC) did not complete the bearish head and shoulders pattern on Jan. 27 as the bears could not sustain the price below the critical $120 support. The altcoin rebounded sharply on Jan. 28, suggesting strong demand at lower levels.

Conversely, if the bulls can drive the price above the downtrend line, it may result in a rally to $165.9709. The bears may attempt to defend this level but if the LTC/USD pair can climb above it, a retest of $185.5821 is possible.

The price action at the downtrend line is likely to decide whether the next move will favor the bulls or the bears.

Bitcoin Cash (BCH) bounced off the $370 support on Jan. 28, which suggests the bulls are attempting to defend this level. The rebound is currently facing resistance at the 20-day EMA ($437).

However, the 20-day EMA is flattening out and the RSI is just below the midpoint, indicating a balance between supply and demand.

If the bulls can sustain the price above the 20-day EMA, the BCH/USD pair may rise to $465 and then to $515 and extend its consolidation by a few more days.

Binance Coin (BNB) bounced off the support line of the ascending broadening wedge pattern on Jan. 28, which shows strong demand at lower levels. The bulls continued their purchase today and pushed the price above the $43.4241 resistance but are struggling to hold on to the higher levels.

The gradually upsloping 20-day EMA and the RSI in the positive territory suggest the path of least resistance is to the upside. If the bulls can sustain the price above $43.4341, the BNB/USD pair could retest the all-time high at $47.2187.

A breakout of this resistance will suggest the resumption of the uptrend with the next target objective at $50 and then $55. This bullish view will invalidate if the pair turns down from the current level and breaks below the support line.

Stellar Lumens (XLM) broke below the $0.26 support on Jan. 27, but the bears could not capitalize on this weakness. This attracted aggressive buying from the bulls on Jan. 28, resulting in a sharp bounce that pushed the price back above $0.26.

The buying continued today and the bulls propelled the price above the $0.35 resistance but they have not been able to sustain the higher levels as seen from the long wick on the day’s candlestick.

Aggressive buying at lower levels and selling at higher levels suggest the XLM/USD pair may remain range-bound for a few more days.